Tea is filled with a long list of health benefits – one of those being that it can reduce anxiety. So if you have anxiety, drinking tea might be the answer for you!

There are certain herbal teas that have anxiety reducing benefits. This includes being able to help you relax, sleep at night, or reducing tension. But, drinking tea for anxiety might just help by giving you a moment to yourself to debrief.

These are my top 10 best teas for anxiety but it’s all about finding the one that works best for you. Keep in mind some will have side effects to drinking them as well.

Psst! This blog post contains affiliate links in it which sends me a bit of extra money if you use them… at no extra cost to you!

An electric kettle: find at the Bay.com | find on Amazon.com
A teapot & teacup set: from Anthropologie.com
Filters or steeper: DavidsTea.com
A Tea Tasting Journal:  Keep Track of the Teas You’ve Tried | Etsy Canada

There are still a lot more studies that are needed to be done on tea, tisanes, and it’s connection to anxiety. I’m also not a doctor so please speak to your doctor before trying anything new. Tea (especially herbal teas) have a reputation of interacting with medications.

Herbal tea can also effect people very differently (as we have learned from the benefits and risks of hibiscus tea – what can be beneficial for someone can be dangerous for others).

On top of all this, most of the research on tea for anxiety is not even using tea or even on humans. Studies can use extracts, pills…etc. They can be done in a lab or even on mice. This is just something to keep in mind when trying to find a calm tea for anxiety.

The Good Living Guide to Medicinal Teas
by Jennifer Browne

The act of drinking tea is soothing in itself. It allows you to take some time out of your day for yourself. It’s something you can do to relax and not have to think. You boil water, you steep your tea, and then you enjoy this hot beverage – who wouldn’t enjoy that!?

But that doesn’t mean tea itself doesn’t also have soothing and relaxing properties that also help you. Although it’s still uncertain what it is that helps with anxiety in most of these teas, the studies show that the tea is always more effective than the controlled placebo group.

Of course, the ritual of making tea might help as well but what type of tea you make can also make a difference.

Refine your tea palette with my Tea Tasting Journal to record and take notes on every new tea you try.

The best teas for anxiety include both caffeinated tea (from the Camellia sinensis plant) and herbal tea.

1. Green Tea For Anxiety And Depression

Tea from Camellia sinensis (white, green, yellow, oolong, and black tea) all have compounds that can be stress reducing and beneficial for our mind. But green tea tends to have the most of these beneficial compounds because it’s made from young leaves (and sometimes shade grown – protecting the leaves and compounds from the harmful sun rays).

Tea contains L-Theanine which is a relaxer and anxiety reducer as it boosts the neurotransmitter GABA and subdues the effects of caffeine. See the study here.

What Are The Different Types of Japanese Green Tea?

Green tea is also very high in EGCG. A study showed that EGCG led to calmness and reduced self rated stress. You can read more about the study here.

Human studies are only starting to be conducted with green tea but they show promising results. For example, there are two similar studies that showed less depression in older adults after regularly drinking green tea (see the study from 2021 here, and the study from 2018 in Korea here). Another study from 2018 saw the benefits of decaffeinated green tea on stress and anxiety which led to a better sleep.

Black tea also contains both L-Theanine and EGCG, but less of each and more caffeine. Despite being the most caffeinated out of Camellia sinensis teas, black tea has also been shown to reduce stress levels.

There was a study done in London in 2006 that looked at stress and drinking caffeinated black tea for six weeks. Participants drinking black tea were able to de-stress quicker and had less of the stress hormone cortisol after being exposed to a stressful situation. Read more about the study and the results here.

There haven’t been any studies since, but it might be worth switching your cup of coffee for a cup of black tea in the morning. Black tea is definitely a good option if you’re looking for a tea for anxiety with more caffeine.

As for the other Camellia sinensis teas, there just haven’t been enough studies but they all contain similar compounds as they’re all from the same plant – read more about the difference between each type of tea here.

If you want to avoid caffeine, the next best teas for anxiety are all herbal options. Keep in mind that because they’re an herbal tea for anxiety, they can interact with some medications. It’s always best to speak to your doctor first.

3. Chamomile As A Calm Tea For Anxiety

Chamomile is a known sedative, even a mild tranquilizer to help people sleep. But a 2016 study found that if you drink chamomile tea long enough it has beneficial effects on anxiety as well. More specifically, it reduced moderate-to-severe symptoms of generalized anxiety disorders (GAD). Read more about chamomile and anxiety here.

4. Lavender Tea For Anxiety And Depression

This beautiful purple flower can actually be a killer herbal tea for anxiety. There are several studies using lavender which showed promising results for both anxiety and depression.

In a study with elderly people, consuming lavender tea was found to their increase moods. They suggested to drink it as it is mainly beneficial with very little risks. Read more here.

There was another study using lavender oil which found that it was as effective as lorazepam in adults with Generalized Anxiety Disorder (GAD). Plus, it was generally very safe to use as well. Read more about the study here.

Lemon Balm is a part of the mint family. You use the leaves to make tea, and they look very similar to mint leaves, although instead of having a minty fresh taste it’s lemon!

This was once again tested in 2018. Participants were given lemon balm supplements for 8 weeks and saw a decrease in depression, anxiety, and total sleep disturbance, when compared with the placebo group. See the study here.

The next few herbal teas for anxiety are a bit more uncommon but might be worth tracking down. Check your local health food store for some of these flowers and herbs.

Growing Tea In An AeroGarden: Is It Possible?

St. John’s Wort is actually the most prescribed herbal remedy for anxiety (along with yarrow). It’s also one of the most studied teas for anxiety and depression.

I had never heard of this yellow flowering plant before but it’s actually very common worldwide. In fact it’s often referred to as somewhat of a weed because the only places it won’t grow is in the tropics, deserts, and polar regions.

St. John’s Wort kind of works like anti-depressants and anti-anxiety meds. They stop your brain from using neurotransmitters like serotonin, dopamine, GABA, and norepinephrine. This opens up your brain to be used more effectively, and as an effect makes you feel happier. You can read more about the studies on St. John’s Wort here.

I will not lie, this name is less than appealing, but we cannot judge a tea by it’s name!

7. Yarrow Tea For Anxiety And Depression

Yarrow is a flowering plant that has been used for centuries for its medicinal properties. The flower can actually be in a range of beautiful colours – from white and soft pastels to vibrant shades of yellow, red, orange, and gold. Because there are so many variations of this plant, studying it has not been easy.

Yarrow does have promising effects as a tea for anxiety and depression as it contains flavonoids and alkaloids. This was shown in a 2012 study with mice and yarrow extract where it had anxiolytic-like effects – read more here. Based on previous research, a paper published in 2016 showed alkaloids have a lot of potential to be a natural antidepressant.

Rosemary tea is the same rosemary herb you use in your cooking. It’s actually from the mint family as well. Rosemary is known to be a good mind booster that’s beneficial for our mental health (this includes things like concentration, memory, but also stress, anxiety, and depression).

There was a 2021 study that showed promising results as a tea for anxiety. Using rosemary tea for 10 days participants were shown to have an increase in BDN – a depression biomarker. It’s believed that rosemary contains both antidepressant and anxiolytic properties, but more studies are still needed. You can read more here.

Yes, hops is exactly what you think it is. This is what they use in beer! You can use the flower and the green cones of the hops plant to make tea for anxiety! Maybe that’s why beer helps us relax sometimes…?

Hops is good to treat restlessness, tension, anxiety, and  insomnia or other sleep disorders. There was a 2017 study with young adults who reported to have mild depression and anxiety symptoms. The results after four weeks of taking a hops dry extract supplement showed lower levels of anxiety, depression and stress. Read more about the study here.

Liquorice tea is a favourite because of its natural sweetness, plus it can also be quite beneficial for anxiety symptoms. Unfortunately, it comes with the most risks out of the any of the teas for anxiety.

Liquorice root is a tea for anxiety because it is an adrenal toner. Adrenal glands produce hormones that help regulate essential functions in our body – one of those being how we handle stress. So as an adrenal toner, liquorice can help fight stress and restlessness.

With excessive use, it in fact be toxic to us – read more about the warning here.

Make Your Own Tea Blend For Anxiety

You don’t have to choose one tea for anxiety, try mixing some together for a tasty anxiety reducing elixir. For example, try a floral herbal blend by mixing some lavender and chamomile together.

Or if you want some caffeine, try black tea with liquorice for sweetness instead of sugar. Try a bunch of different options and see what works for you!

You can also buy some relaxing blends to try out. 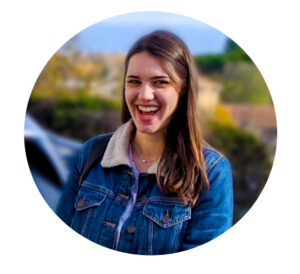 Welcome to Afternoon Tea Reads, I’m Meghan, a semi-neurotic Montrealer who’s not afraid to voice the unpopular opinion and say it like it is. Take a minute to discover something new – perhaps plan your next trip, fall in love with tea, or simply escape the daily afternoon grind for a bit… Read more about me here

Taste your teas like a professional with my all new digital and printable tea tasting journal! Shop Etsy Today!